There have been lots of articles lately on the growth of the gig economy. Major players in this industry like Freelancers Union in the US and Upwork have reported that 55 million Americans have joined the freelance economy, creating $1 trillion in earnings for 2015. Still the question has always remained: Is Freelancing happening by choice or by necessity?

An in-depth research from McKinsey Global Institute (MGI) on the independent workforce has finally clarified that question and we now have a better understanding of why professionals are turning towards freelancing in today’s economy.

Based on a survey of 8.000 respondents across Europe and the United States, MGI questioned their professional satisfaction and aspirations for work in the future. One of the highlights of the report, titled “Independent work: choice, necessity and the gig economy”, reveals that 70% of current freelancers have chosen their career by choice. This is contrary to the often heard comments from full-time workers and recruiters who say that freelancers are professionals that could not find a “real” job. From the 70% who choose freelancing as their career, 43% are categorized as  “Free Agents” (those who actively choose independent work and derive their primary income from it) and the balance are considered “Casual earners” (those who use independent work for supplemental income and do so by choice).

As for  the other 30% of freelancers, almost half (47%) are called “Reluctants” (those who make their primary living from independent work but would prefer a traditional job) and the other 53% are “Financially strapped” (who do supplemental independent work out of necessity). 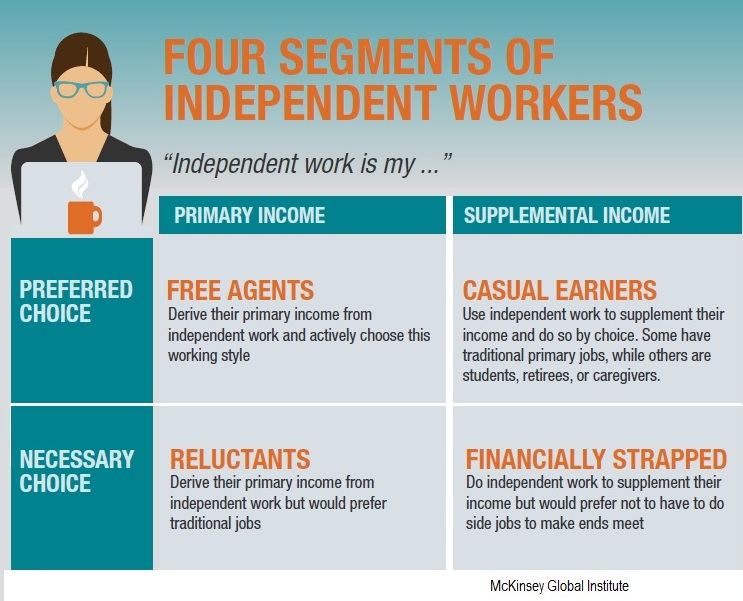 If you are a freelancer, you will be happy to see that the results also concur what you may already feel. Free Agents report higher levels of job satisfaction than those in traditional job by choice.

“Most independent workers have actively chosen

their working style and report high levels of

satisfaction with it.”  MGI

The report finds that up to 162 million people engage in some form of independent work in North America and Europe. We can expect the total number of 162 million freelancers to grow since 1 out of 6 traditional workers would like to become self-employed.