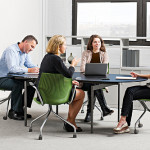 Generational theory argues that as individuals are born into a specific political and social reality, they will develop a unique set of value, belief, and personality patterns from which some predictability can be drawn in terms of future behavior. In other words, people’s behavior inside and outside of the workplace will be influenced by the values and experiences they have acquired as a result of the period they were born and raised into. As Baby Boomers are starting to leave the market and retiring, Generation X (Gen X-ers) are beginning to assume leadership roles in organizations, while Generation Y (Millenials) are paying for Baby Boomer’s retirement by entering and slowly rank-climbing positions in the workplace; in fact, by 2031 Generation Y employees entering the market will be responsible for replacing all the Baby Boomers leaving the workplace.

But what are the workplace consequences of dealing with employees pertaining to different generational cohorts? Is each generation motivated by different, or even, conflicting factors? Well, its all about preferences really, and what do each of us prioritize at work; yet, interestingly enough and despite age differences, for the most part the multi generational workforce seems to be moving towards one same direction…

The generational cohort commonly labeled as Boomers applies to individuals born between 1946 and 1964. Specifically, in North America this generation was affected by the Vietnam War, the civil rights and Women’s movements, the sexual revolution, and the assassination of John F. Kennedy and Martin Luther King. Generation X makes reference to people born between 1965 and 1981; Gen X-ers were raised during a time of economical uncertainty, the exponential growth of AIDS, and the fall of the Soviet Union. Additionally, compared to any other previous generation, Generation X children had a higher probability of experiencing their parents’ divorce or job loss as a result of downsizing. On the other hand, Generation Y has been, by far, the most studied in literature given the abrupt changes technology has brought-upon this cohort. Born between 1982 and 1999, this generation has been influenced by exponentially rapid changes in technology; from the development of the first cellphone, to the creation of MP3’s and portable computers, to the introduction of wireless Internet connection, this generation has been raised with technological artifacts that are constantly getting smaller, faster, and more importantly, which are able to store and provide an enormous amount of information almost instantly. Thus, it comes as no surprise that Generation Y members are often viewed as highly self-entitled and as know-it-alls given the information revolution they were born into.

Nevertheless, what seems to bring the multi generational workforce together nowadays, is the necessity for a job that provides personal freedom and development. We seem to crave for a workplace whose priorities include our well being; call it spoiled, lazy, or whiny, but the reality is that Generation X-ers and Y-ers have seen far too many examples of people replacing living for working and Baby Boomers have experienced it themselves for way too long. Now, the only reason companies are actually starting to provide flexible hours, part-time, and freelancing opportunities, is not because they want everyone to just be content at the expense of their profit, no, its because it actually works financially! Happy people are productive people! It sounds too good to be true, but it just so happens that it makes sense; overworking and not providing sufficient time for personal development will lead to stress, which in turn will lead to burnout, which in turn will lead to less money, which in turn will lead to both unhappy employee and employer. SO employee satisfaction=employer’s monetary gains  ( 🙂 = $). Although simply put, it is a win-win situation for employers and employees to have non-traditional job schedules and arrangements available; and that, is a fact that applies to all of today’s multi generational workforce, time for personal growth seems to join us all.

If you are looking for flexible work, create your profile today at www.workhoppers.com.