We live in an era where we have become ubiquitous without being supernatural. How? Well, thanks to the Internet, the different Web 2.0 platforms that accompany it, and rapid technological advancements, we have managed to be everywhere: on the couch at home while we type, but also in Bangkok, liking our (travel-savvy) best friend’s picture via Instagram, and also in our work meeting in Chicago through teleconference; that is, modern technology has offered us the gift of  telepresence and in particular the telepresence robot.

Without a doubt, this trend towards being in as many places as we can taps into our mundane dreams of teleportation; and you know what? We are actually doing a pretty decent job in stretching our presence throughout the globe. Now, in a more serious note: does this have implications in the workplace: ABSOLUTELY. Have you seen one of these yet any chance? 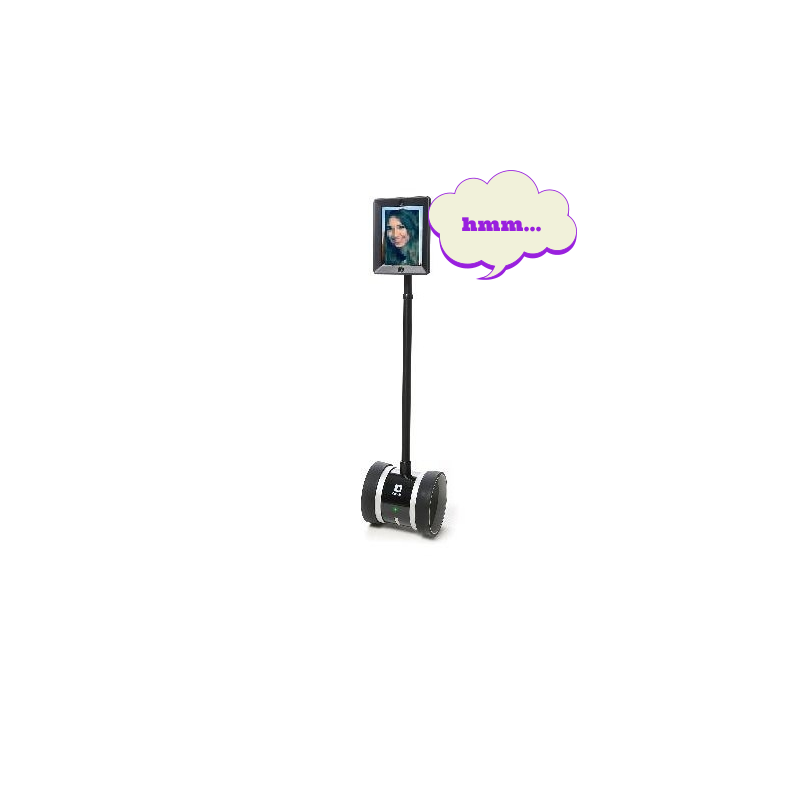 That my friends, could might as well be your team-member in Taipei or your boss in Boston. I was shocked to see one of these during the fifth-season premiere of The Good Wife as it made its debut as the fumbling, irritating avatar of a remote worker. With my jaw dropping, I had to know more. Indeed for the past decade, companies such as Double Robotics have been developing devices such as the one seen in The Good Wife. The so-called “Double” is a robot, which does not only give you a chance for your voice to be heard no matter where you are in the planet (as long as Internet is available of course- I have a feeling we are developing a slight and tiny dependence on the whole online deal) but also, gives you an actual physical presence in an office. This 60” mini-you is a mobile robot that just needs a Tablet of some sort to be attached to its top and voila! There you are, sitting in your office in Montreal but rolling around the office corridors in your at corporate Toronto head office. And just like Double, a series of similar devices are now available through different developers at decreasing costs (Double is $2,499 and you can order it directly in the Apple store!).

Truly, it is now undeniable, that concepts such as working from home are increasingly being enabled by the technological advancements of today’s Western society. According to Associate Professor at Cornell’s School of Industrial and Labor Relations, Brad Bell (2013), “one factor that certainly has driven the growth we have seen of remote work in recent years is advances in technology”. Furthermore, Bell describes the enabling of today’s remote work with 4 C’s:

Communication: We can access our work from anywhere and at anytime (email, images, videos (non verbal cues), telepresence robots!)

Connectivity: As long as we have Internet we can make use of our company’s VPN for instance and basically have a work/office-computer no matter your location.

Collaboration: Sites such as LinkedIn, GoogleDocs, Dropbox enable us to share information simultaneously and in real time.

Content management systems: With the help of Cloud Computing, data can be managed through online, organization-wide platforms.

Now, the evolution of these telepresence devices has enormous implications in the job flexibility we will increasingly witness at the modern workplace. Working some days or most days from home is an increasing reality for many workers and one that, in fact, is beneficial for employers. After all, a satisfied employee who is able to enjoy flexibility at work is closely related to decreasing turnover costs and increased profitability mediated through employee motivation and engagement. So next time you see your boss rolling in two wheels, don’t be that surprised, chances are that in the future most of us will have a robotic-self having meetings with both present and telepresent co-workers alike.

Bell, B. (2013) “Is it technology that drives remote work?”Retrieved from: https://www.youtube.com/watch?v=19c7jIxIsVU