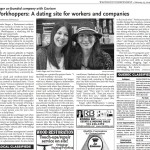 This article originally appeared in the Westmount Independent February 25, 2014, written by Stephanie O’Hanley- A workhoppers.com review.

Linda Singer, a Westmount resident, and Vera Gavizon of Cote St. Luc spent over a year in coffee shops carefully planning Workhoppers, a matching site for flexible and casual work.

Though Workhoppers (workhoppers.com) launched in August 2012, the website has only been online for six months. Workhoppers helps companies find local professionals during busy periods or when they don’t have the necessary in-house skills.

The site operates globally in English and French (a Spanish site is planned for the end of 2014), with companies finding local people in neighborhoods, for the most part, across Canada but also in the United States and in other parts of the world. Over 3,000 freelance members have joined so far. Of these, 61 percent are female and 54 percent have a university degree.

For small and medium-sized businesses offering work on a part-time, temporary, contract or freelance basis, “it’s an extra hand”, Gavizon explained. Instead of using a temp agency, “you can go direct and find somebody you need.” Gavizon said many companies can’t afford to pay full-time workers and hiring temp agencies two-to-three times a year can be expensive.

“We have about 200 companies right now” Singer said. “Most of the companies understand easily the concept of hiring a part-time person. The challenge is for them to understand that they can easily hire a local person even for just a few hours to help them.”

Gavizon said she and Singer met when their children were in daycare. The inspiration for Workhoppers came from their experiences as working moms. Both Gavizon and Singer hold MBAs, but struggled to balance their “dream jobs” with raising children, they said.

Once a full-time management consultant, Gavizon said she found it “impossible” to give her two children the attention she felt they deserved while also working hard at a glamorous career. So she started working a project-by-project basis. “I liked the flexibility,” she said.   It was a similar experience for Singer, who has a Masters in Information science and took courses in the MBA program.

Gavizon said when they dreamed up Workhoppers they thought about the talented and well-educated mothers they knew who wanted to work, but whom full-time hours didn’t suit. “We thought it was a mom issue, but it’s not,” Gavizon said.

With talk of a flexible work revolution, stay-at-home mothers aren’t the only people seeking flexible work arrangements and a better work-life balance, Singer and Gavizon said.  Generation Y (people born between 1978 and 1989) tends to embrace opportunities to balance work and life, there are semi-retired people looking for work and even moonlighters, for instance lawyers who like to blog or human resources folks who enjoy writing and who don’t mind working outside their regular work hours. Students are looking for work experience and chances to build up their CVs, Singer said, pointing to Workhoppers ties with universities and with Youth Employment Services.

Wanting flexibility doesn’t mean people work less or perform poorly, Gavizon and Singer said, “They want to work very hard,” Gavizon said. “They just want to work when they can.” Added Singer: “That’s what sets freelancers apart; they want to do an amazing job”.

Singer called Workhoppers “a dating site for freelance workers and companies to find each other.”  Freelancers post online profiles listing their location, resume, education, skills and availability (mornings, afternoons or evenings; onsite, offsite or virtual) and companies post jobs or projects stating who they are looking for. Only members can browse profiles and posts, receive matches or contact other members. “It’s a community and you find each other’” said Singer, stressing that Workhoppers is not a job site but a skill site. Sometimes positions aren’t advertised and companies find people by browsing profiles, she said.

Non-profit groups are welcome to post volunteer positions, Singer added. “A lot of our Workhoppers are willing to volunteer their time,” Gavizon said.

Membership is free for freelancers. As for companies, “what we offer is a ‘freemium’ model,” Singer explained. Companies may post one job free and be seen and contacted by candidates, she said.

To post more than one job and receive “all the extra perks such as full access to the database, targeted networking of their jobs and matches based on our unique algorithm, which finds candidates to a find degree of specification” Singer said companies pay an “extremely competitive” membership fee, that starts at $49 for one month. That cost, Gavizon said, is a far cry from the $600 a company pays to list on Workopolis or $350 it costs on Linkedin, where “it’s very expensive for short term help.”

Companies can rate workers and the reviews serve as recommendations and help in matching freelancers with companies. Singer said she and Gavizon vet companies to make sure they’re legitimate.

And unlike answering an ad on Kijiji, where candidates often don’t know who they’re approaching, with Workhoppers candidates can create a profile and target companies. “We find that having a photo can help them well themselves,” Singer said. “A graphic designer can put an image of something they’ve done.”

Unlike sites such as ODesk or Elance, where feelancers bid for contracts and work virtually, at Workhoppers companies and workers often meet in person and decide together how they want to work, Gavizon and Singer said. “When you take an Elance or ODesk job, you can’t talk to the company in person” Gavizon said. “We want people to make decisions based on a connection,” she said.